Chapter 7 and Other Questions

May 29, 2014
I'm going to take a few moments to answer some questions and, well, it's been a long time since I've blogged.

When is the story picking up again?
At this point, five of the next six chapters are through at least their first and/or second draft with the sixth blocked out. I've also got 3 covers more or less done. This is all a big change from the first go round with the arc 1. That first chapter, and every chapter thereafter, were written and edited in one month's time. That was rough. This time should be much, much nicer for all involved. I wrote the first big chunk of arc 2 in November for NaNoWriMo and have been working it over ever since (when I wasn't in a deep, deep Dark Souls black hole). I'm pretty much on schedule for where I want to be, which is reinforcing what I hope to be my new standard, a new chapter every month from September through February until the story is done. September's my goal for chapter 7. Specifically, the 15th just like was done with the first run. Which is just 109 days away! I hope that doesn't feel like a long wait for you, because it feels like an incredibly short amount of time for me...

Will chapters still be free?
Yes, new chapters will be free on Amazon the first three days they are up.

Will chapters 7-12 be collected for a print edition, much like chapters 1-6?
Yes, I plan to continue the print versions as the story goes on. Right now, I hope to have the print versions ready about 3 months after the arc finishes. So in May, that is if the September through February release schedule pans out.

There's a print version of Chapters 1-6? Where can I get that?
Amazon. Search Pneumadiluvians Volume 1.

When's the movie deal?
Not sure. Are you a producer?

Finally, here's a couple very rough mock-ups I've done for some of the new chapters. 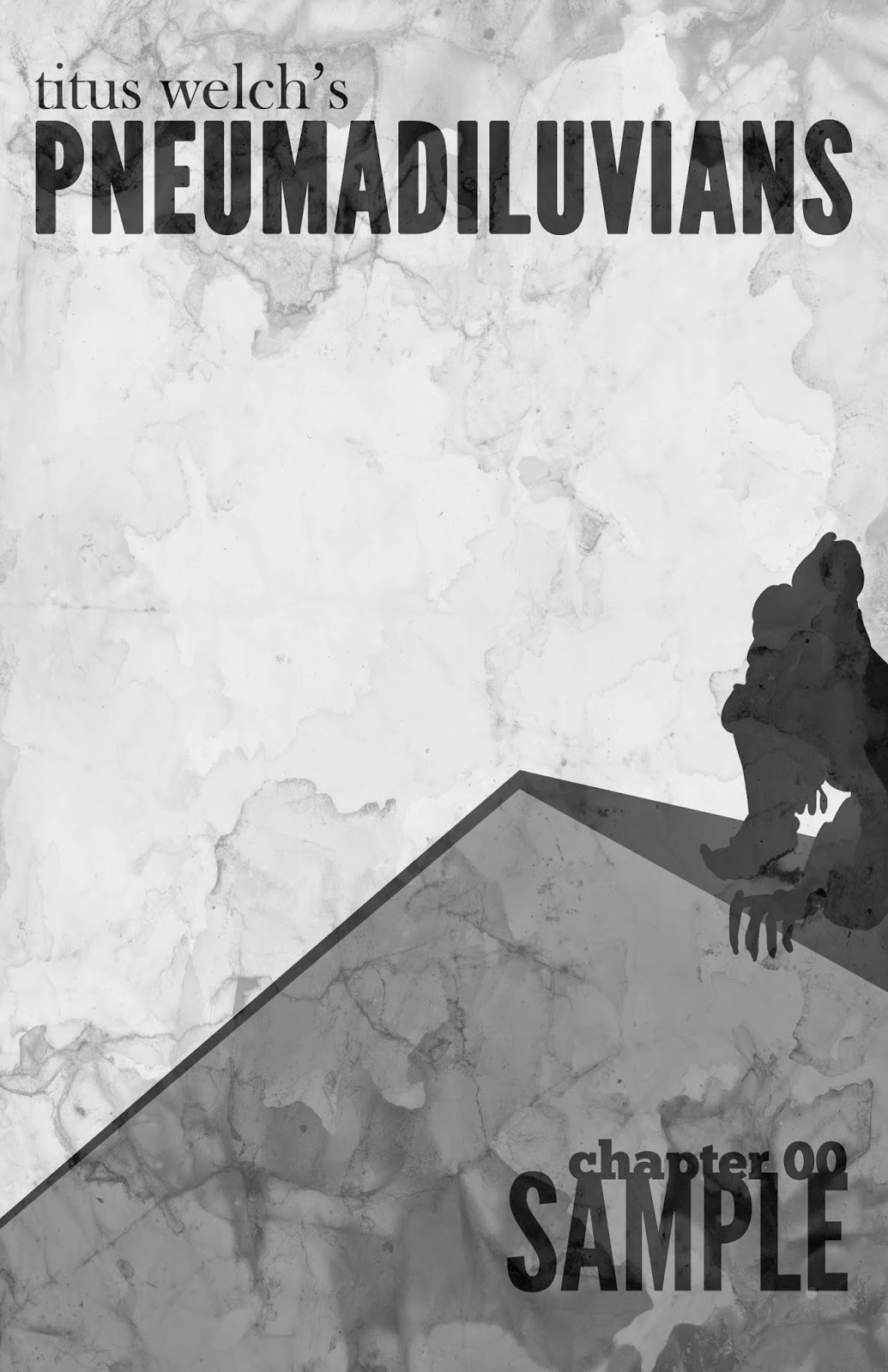 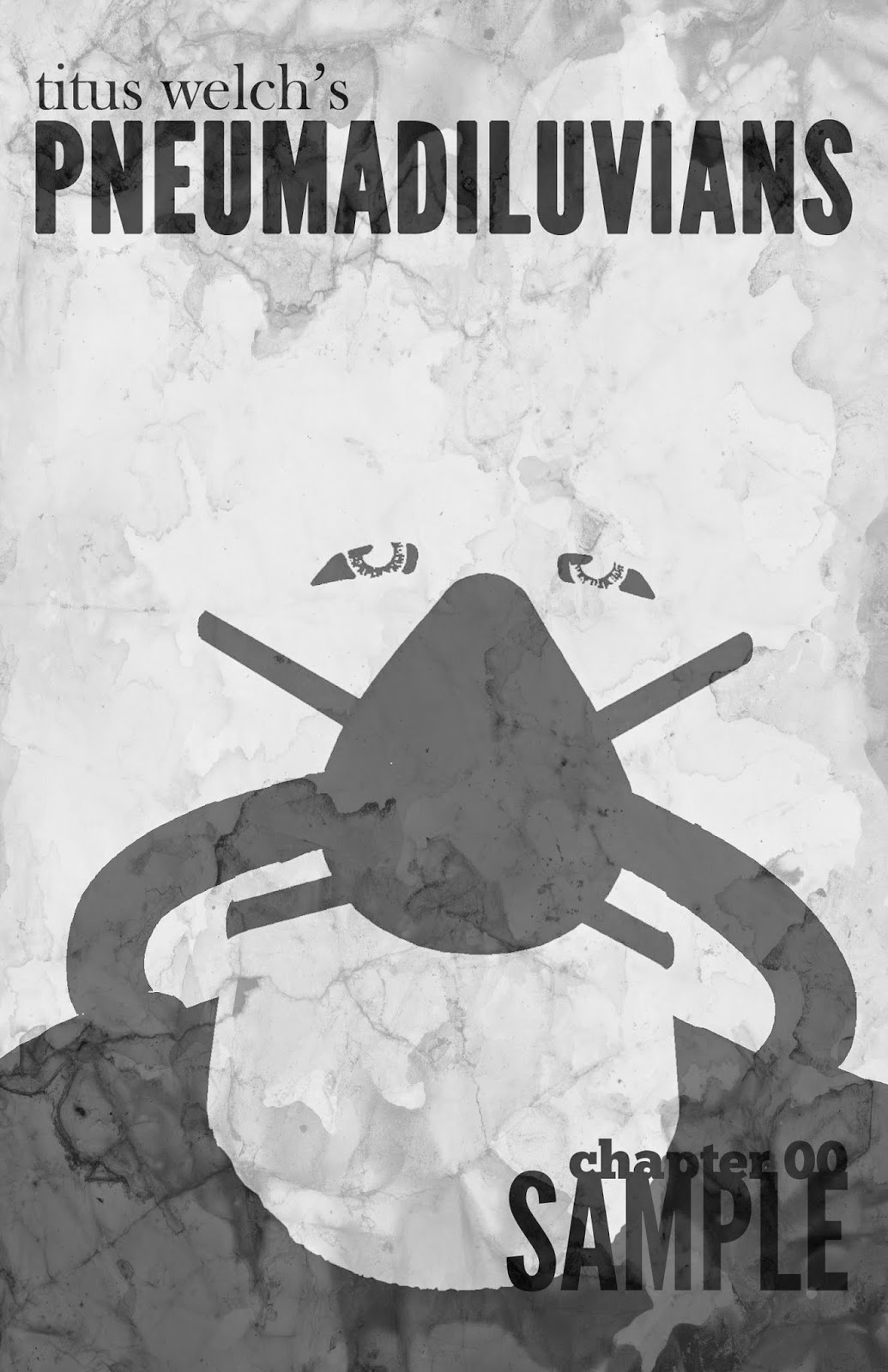 Every time I write one of these I have to apologize for how long its been since I've written one of these. For me, it comes down to writing stories or writing about writing stories... and thus I write few blogs. But I know that from a reader's outside perspective it would appear that I've fallen off the face of the Earth and have given up on writing completely if it's been too long between posts. So here I am, writing about writing. Status updates! Volume 2: -Chapters 7-12 are being proofed and prepped to be collected into Volume 2 for digital and print -Volume 2 cover is in production -Epilogue needs written Volume 3: -Chapters 13-18 are  having their first draft written Volume 2 I hope to have digital/print published this summer. The Epilogue and cover are the only items in need of "new" work. Everything else is proofing and proofing and proofing, which just takes time. Chapters 13-18/Arc 3/Volume 3 I hope to have ready for a September 2015

Dusting off the old site...

5+ years since I've posted anything. Thought I should get this site back up and going. Will see if anything happens here or not.

How did you hear about some of your now favorite Stories?

Most of what I do for Pneumadiluvians I like to think that I have at least a little bit of talent towards, mainly writing and art. I guess if I didn't, I wouldn't be wasting my time with them. However, something I've never been great at for most of my life is a salesmen. Not sure why, I'm just not. So, this leaves me thinking, If I'm going to be putting effort into getting the word out about Pneumadiluvians, I better be putting it into the right places. Help me make sure my efforts go to the right places, leave a comment and let me know how you've come across some of your favorite stories (whether books, tv shows, or movies, I don't care).